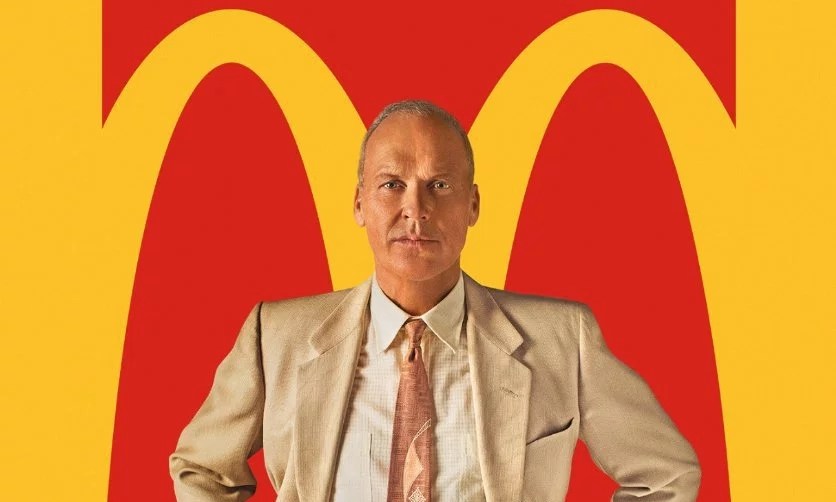 This a film about how McDonald’s became a huge franchise. Please tell me after it’s done this made you wanna go to McDonald’s because you get very hungry after watching the employees cooking the food. I knew that was going to happen when I watched The Founder.

The true story of how Ray Kroc (Michael Keaton), a salesman from Illinois, met Mac and Dick McDonald (John Carroll Lynch and Nick Offerman), who were running a burger operation in 1950s Southern California. Kroc was impressed by the brothers’ speedy system of making the food and saw franchise potential. He maneuvered himself into a position to change the game of the multi-billion dollar empire.

This is a fascinating story to tell on screen. McDonald’s is the country’s most popular fast food restaurant and probably of all time. Kroc even called it the “new American church”. And since John Lee Hancock (The Blind Side, Saving Mr. Banks) and writer Robert Siegel (The Wrestler) are attached to this project, maybe it could be an interesting time show how it all came to be. While The Founder wasn’t that great, it’s still serviceable for this true story to be told.

Revolutionize is the word to perfectly describe the way Kroc wants McDonald’s to be in a way that absolutely makes sense in the same way the McDonald brothers came up with the original idea of McDonald’s including the famous “Golden Arches”. Because back then, it takes too long for your food to get ready while sitting in your car. So they supervised so faster way for the customer to get their food as quick as possible. If only that still happens today in some places. Kroc takes their idea and possibly did it for America.

I’ll say this, Michael Keaton is the best comeback actor of the decade. With his roles in Birdman, Spotlight, and now The Founder, it’s great to see him back. His performances as Ray Kroc was very good as the fast-talking salesman to stumbles upon a chance to be somebody. But I love Carroll Lynch and Offerman as the McDonald brothers as they’re the creators of the joint and they don’t want to make a lot of changes to the franchise, but Kroc doesn’t listen to does what he does

But after a while, it left me wondering what else happened as I didn’t think there enough meat to the story. Around when the second act happened, it didn’t leave me intrigued, and though it’s interesting learning about what needs to make the franchise look better, it left me unfocused. The story really reminded me of a fast food version of The Social Network as that one man basically stole the idea from brothers and make it into a popular thing that’s still around today. And instead of Facebook, it’s all about good hamburgers with two pickles on every one of them.

And by the end of it, it’s conflicting how I felt about Kroc in the end. You think he’s going to be the overall nice guy throughout this, but as this person progressed with what he’s doing with the franchise, he becomes unlikable. But it’s Keaton, so I let that slide a little. He’s basically the anti-hero. Even Laura Dern as Kroc’s wife felt underused in her role because she didn’t have that much to do. And to add, I wasn’t impressed by Carter Burwell’s score, to be honest.

Since this was around Oscar season, I couldn’t necessarily see this as an Oscar contender just as this came out. Keaton was possibly in talks for Best Actor but it was a crowded year.

In the end, The Founder wasn’t as great as I hope it would be. But the performances from Keaton, Carroll Lynch and Offerman and the fascinating of how McDonald came to be. It doesn’t make me hate McDonald’s even though I’m more of a Burger King guy myself.

The Founder provided a fascinating enough story with a good performance from Keaton even though something felt missing from this biopic.

0 comments on “The Founder Review: Michael Keaton is Lovin’ It”